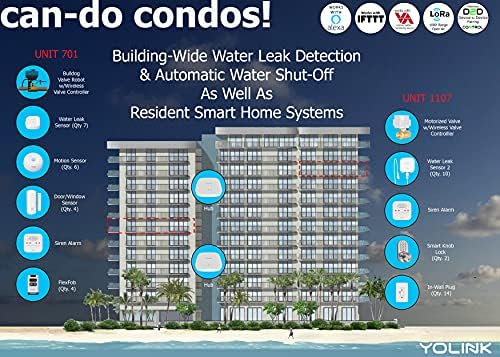 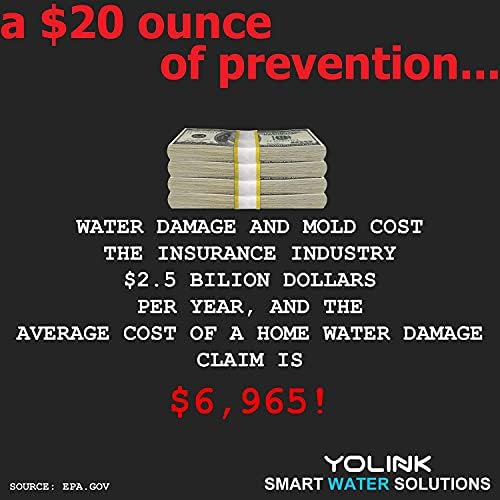 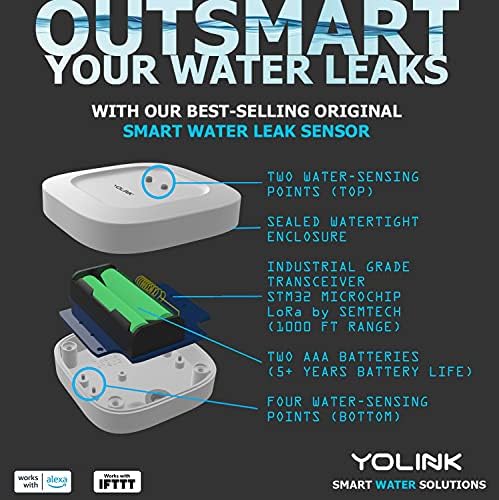 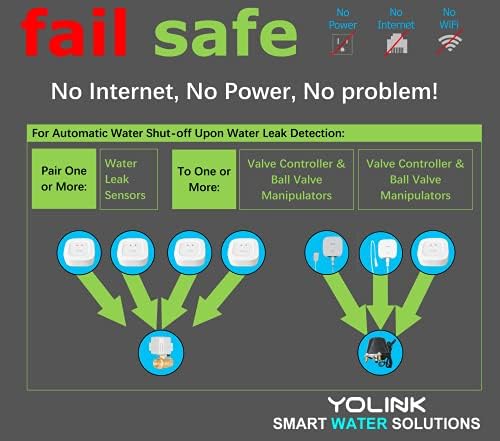 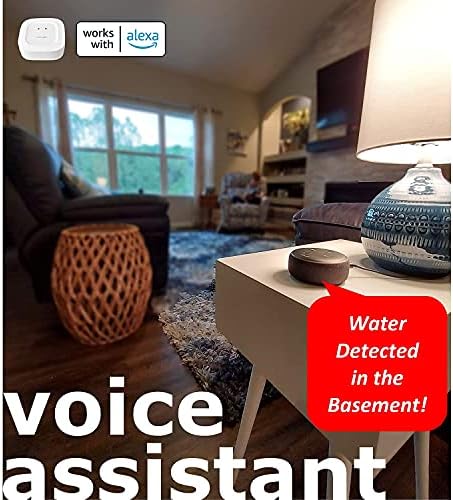 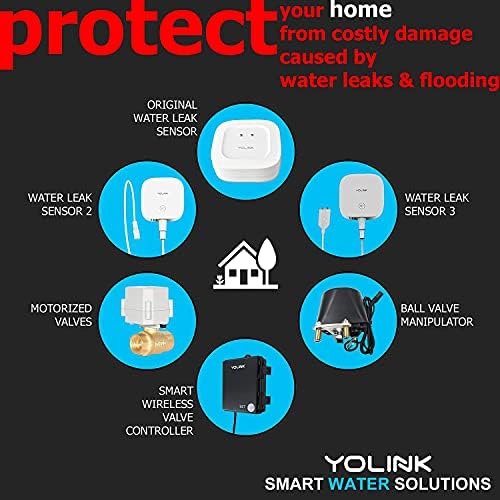 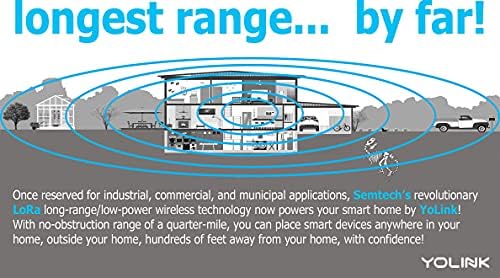 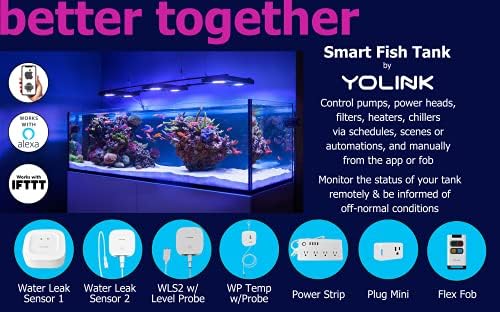 Reliable – Stable communication even in the basementEasy to install – no screws, no tape, no wires, just place on the floor!Alexa_routines – voice announcements from EchoLong-Lasting – 5 Plus Year Battery Life

The risk of water damage in a home is high. In fact, it is one of the most common home insurance claims. Every year millions of homeowners suffer billions of dollars in losses. But these losses can be reduced or even avoided altogether with the new YoLink Water Leak Sensor. YoLink Smart Water Leak Sensor alerts you so you can stop the leak before damage to your home occurs.

Water Leak Sensor is widely used in water leak detection. There will have an alert when any of the three sets of probes were under the water. Download YoLink App, add Water Leak Sensor to your smart home system, which will able to monitor your home’s security in real-time.

Smartphone or tablet running iOS 9 or higher or Android 4.4 or higher

No Tricky Wi-Fi Requirements: While many smart devices use and depend on your Wi-Fi network, YoLink devices utilize a proprietary radio frequency spread spectrum technology known as LoRa (Long-Range). With YoLink, you no longer have to worry about your devices consuming your Wi-Fi bandwidth. (YoLink Hub requires a 2.4 GHz Wi-Fi connection or a wired connection to your network equipment (patch cord included).Reliable Dependability: The rock-solid reliability of the LoRa wireless network and longer-lasting batteries (with early-warning replacement notifications) means your YoLink system will offer years of low-maintenance and minimized downtime.Easy to Set Up – Scan & Play: Install the YoLink app, and after a couple simple steps devices are up and running. No special technical knowledge required.Easy to Use: The YoLink app is user-friendly, intuitive and simple to use. No complicated steps or menus to navigate.Works with Alexa: Receive voice announcements of changes detected by sensors in your home. Initiate automation scenes by voice command: “Alexa, turn on the garage light”, “Okay!”Here to Help: We strive to make the YoLink product experience as smooth as possible, and we are working every day to improve it, in our app and in our product documentation. But if you experience any issues installing our products, call +1 949-825-5958!

YoLink Hub requires a 2.4 GHz Wi-Fi connection or a wired connection.YoLink products work only in the USA and Canada.

Based on LoRa Protocol, YoLink hub reaches a long transmit distance with YoLink Water Leak Sensor of 1,000 feet in the open air, more than 300 feet indoor and efficiently decreased attenuation through physical barriers, reliable communication even under the basement.

1, Create routines to trigger the actions of other devices or services

Get voice announcements from EchoTrigger Alexa-enabled devices, like Smart Valve

2, Query the status of the device, for example “Does the water Leak sensor Open?”

Create applets to trigger the actions of other devices or services

1) get phone calls when there is a water leak detected

YoLink Control is our unique device to device” control technology. Under YoLink Control, the devices could be controlled without internet or Hub. Pair Water Leak Sensor* with YoLink Gas/Water Valve Controller (sold separately). When there is a water leak detected, turn off the valve contoller automatically.

Conveniently check the history of all devices in the ap

Smartphone or tablet running iOS 9 or higher, Android 4.4 or higher

Power up the Hub using the supplied power adapter, connect to your Wi-Fi network (or directly to your router, using the included patch cord), and your YoLink Hub will connect to the App.

Scan the QR Code on the Water Leak Sensor to add it to the YoLink App.

You can customize its name, set its room, and add to/remove from “Favorite”.

Press the SET button on your YoLink leak sensor once to connect it to the Cloud, then it will be ready to use!

Place the new wireless smart leak sensor to whenever you want to monitor.

Know When There’s a Water Leak in Your Home

Know When a Door or Window is Opened or Closed

Know When There’s a movement in Your Home

Know When There’s a Water Leak in Your Home; Built-in Siren

Easy and Effective Property Protection: The YoLink wireless Water Sensor could not be easier to install; just place near or under the equipment you wish to monitor. Suggested uses are near or under sump pumps, toilets, water heaters, laundry machines, dishwashers, sinks, fish tanks and any other location subject to water leaks and flooding.
Early-Warning Notifications: Receive real-time early-warning notifications (in the form of smartphone banner alerts, limited SMS/text messages, and emails) and protect your home and property from water damage; Due to the water-tight and submersible design of the original Water Leak Sensor, an internal sounder/siren would not be heard outside of the water-tight housing. For an audible alarm, consider our Siren Alarm or consider the Water Leak Sensor 2 which has a built-in sounder.
Plug, Plug & Play! Plug Hub into an outlet, plug Hub into your router, scan in new devices, and enjoy your new system, in minutes! Your Hub is the only device that connects to the Internet, and a wired or WiFi connection is required (wired required for easy & fast Plug, Plug & Play, and most reliable and secure connection). WiFi connection set-up difficulty varies and requires changing settings to your network and/or your phone Changes to your network, passcodes, etc, require changes in the app.
From Simple to Super-Smart: After setting up your notification preferences, keep it simple and let the YoLink system do the rest and monitor your home and property for you. Or, utilize available advanced automation features, including 3rd-party integration with Alexa and IFTTT, to interact with other YoLink and 3rd-party smart devices. Limited only by your imagination!